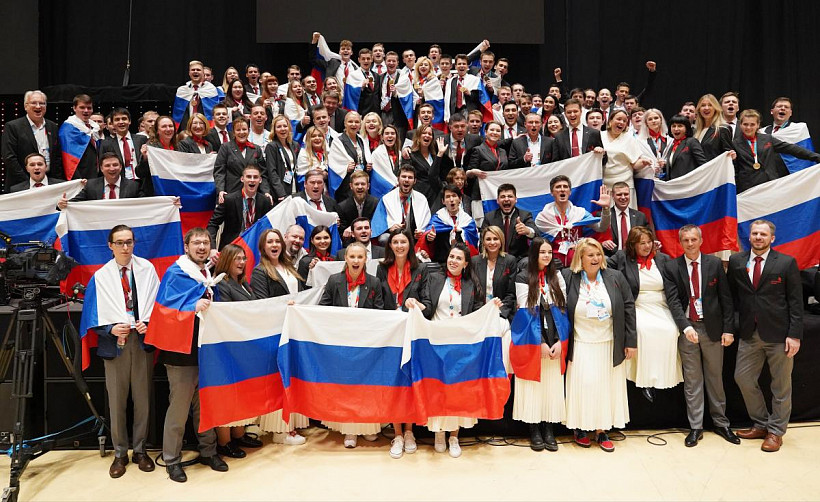 On September 26, the results of the EuroSkills Graz 2021 were announced in Austria. The WorldSkills Russia National Team took 1st place according to the results of the team standings, medals and points, thus confirming its leadership in the international arena under new conditions in the framework of the first full-time Competition after the pandemic. The second place was taken by the team of the host country.

"I congratulate our competitors! They have become the strongest professionals in Europe again! However, the potential of hundreds of thousands of professionals with unique practices of training specialists according to the WorldSkills standards is far from being exhausted. Our task is to provide a comfortable, understandable algorithm for the demonstration of their talents to millions of young Russians so that not only members of the WorldSkills Russia movement but any graduate of a Russian college could be proud of their skills and realize themselves professionally. Another absolute victory in the Competition over the teams of European countries once again proves the effectiveness of scaling the experience and practices of WorldSkills in our country", - said Tatyana Golikova, Deputy Prime Minister of the Russian Federation.

This was a record number of medals for Russia at the EuroSkills Competition. It is worth noting that our team has made a breakthrough, winning medals for the first time in: Bricklaying, Landscape Gardening, Painting and Decorating, Health and Social Care, and Mechatronics.

Eldar Seydametov and Vladislav Dubanov, the members of the WorldSkills Russia National Team in Mobile Robotics received Mr Jos De Goey Best in Europe Awards, the highest award of the EuroSkills Competition, got the maximum of 1,401 points among all competitors. Compared to the Austrian competitor, the second in the ranking, who scored almost half as much – 845 points in Fashion Technology.

"I thank all the members of the WorldSkills Russia National Team for the traditionally high level of performance, for the dedication! The many–thousand expert community of Russia, professionals of all industries, deserves no less appreciation. This is more than a hundred thousand members of the movement, they facilitated to win in Abu Dhabi, Budapest, Kazan, and here in Graz. These people have unique techniques for training professionals, and, of course, today they celebrate victory, - said Robert Urazov, WorldSkills Russia Director General. - WorldSkills Russia, with the support of the state, managed to identify, motivate and rally tens of thousands of Russian professionals. This is the main capital of the movement and the whole country. With the victory in Graz, I hope we are moving into another dimension: the number of international victories has proved that we definitely know how to train a world-class specialist and form global trends in training programmes. Now the question is the speed and quantity of training of such specialists. In my opinion, the stable results of the National Team call for a more vigorous introduction of our practices into the education system through new, progressive forms".

EuroSkills Graz 2021 was held in Austria from 22 to 26 September. As part of the 2021 Competition, the competitors competed in 38 main and 10 presentation skills. These are the largest skills competitions in Europe, held every two years and aimed at improving the level of training and vocational education. The WorldSkills Russia National Team at the EuroSkills Graz 2021 included 57 professionals from Moscow, St. Petersburg, the Republic of Tatarstan, the Republic of Bashkortostan, Altai, the Moscow, Novosibirsk, Chelyabinsk, Tomsk, Orenburg, Ulyanovsk, Lipetsk, Tyumen regions, Krasnodar and Krasnoyarsk territories.

At the previous EuroSkills Competition in Budapest, which was held in Hungary in 2018, Russia also took the gold. Then the Russian competitors won 9 gold, 8 silver, 2 bronze medals, and 10 medallions for excellence. Russia was ahead of Austria and France in terms of the number of medals, and Austria and Hungary in terms of points.