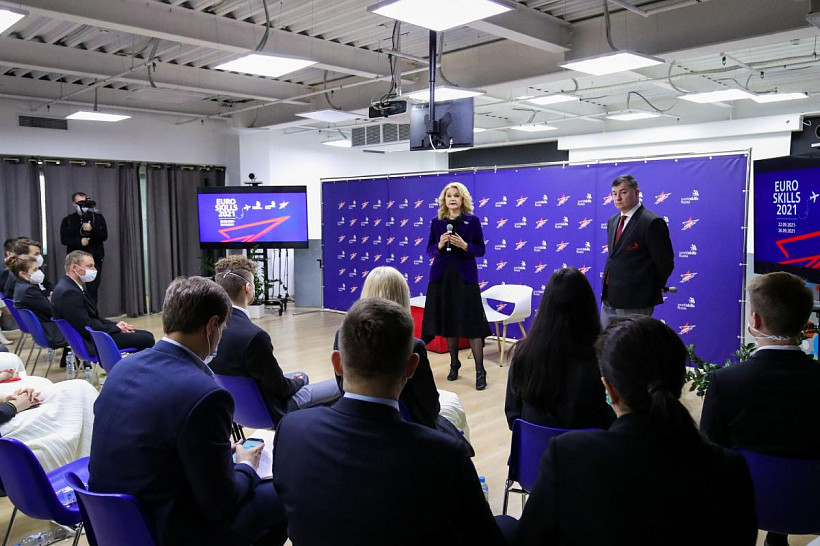 Tatyana Golikova, Deputy Prime Minister of the Russian Federation, met with the members of the WorldSkills Russia National Team at Tochka Kipeniya and congratulated them on winning the EuroSkills Graz 2021.

"I want to congratulate you on behalf of the Government of the Russian Federation and on behalf of my colleagues! You are great! Your result is unique; you have done everything you could. Your happy faces, you with the flag of Russia on a pedestal, the 27 medals and 5 medallions for excellence you won brought unforgettable emotions not only to you but to the whole country," said Tatyana Golikova. – For those who work in the WorldSkills Russia movement, who support it, the competitions are not just competitions. They respond to the challenges facing the labour market and the vocational education system in the country. The Worldskills Russia movement is gaining a significant role in our life, it embodies changes in the personnel training, highly skilled specialists and results in a new level of education in terms of professional excellence and strengthening of the already traditional Demonstration Exam."

"Next month, the country's companies will defend projects where they will tell about their vision of interaction with secondary vocational education. The initiative, supported, among other things, by the leading ministries of our country, has largely become possible due to the success of WorldSkills Russia. What you, competitors, experts, employees, and all people involved in the movement are doing makes the leadership and business structures of our country believe in you. Starting from 2022, large funds will be allocated from the federal budget for the development of secondary vocational education. So, in the period from 2022 to 2024, it is planned to allocate 30 billion rubles for this," said the Deputy Prime Minister.

Stepan Turivnoy, the member of the Russian National Team, shared with Tatyana Golikova his emotions about winning the gold medal in Restaurant Service at the EuroSkills Graz 2021: "Our competitors could not win gold in Restaurant Service for a long time. But we managed to do this, we won gold. When the silver winner was announced – the member of the Portugal National Team, I was shocked: after all, it meant that Russia won. I want to thank experts, trainers, WorldSkills community, and, of course, the guys from the National Team for their great support."

Maria Nezhdanova also brought gold in Hairdressing for the first time in Competition history. She also said that it was important to be supported by relatives and the expert community, who helped her become a winner.

"I can't describe my emotions when I stood on a pedestal and proudly held the flag of the Russian Federation over my head. I hope that we will continue to charge other guys with our energy for future victories and achievements," Maria said.

On September 26, according to the results of team standings at the EuroSkills Graz 2021, the WorldSkills Russia National Team became the absolute champion. Next year, the team members will go to the 46th WorldSkills Competition in Shanghai (China). Over 1,400 competitors in 60 skills from more than 60 countries and regions will take part in it.

"Very strong opponents are waiting for us in Shanghai, including the Chinese National Team. Russia is a country with a huge territory, but, for example, compared to Asian countries, we do not have such a large population. We cannot win with our quantity, so we will do it with quality and skills. The guys are charged to win with their eyes shining. This is the most important thing for us," Robert Urazov, WorldSkills Russia Director General, commented on the preparations for the upcoming Competition.