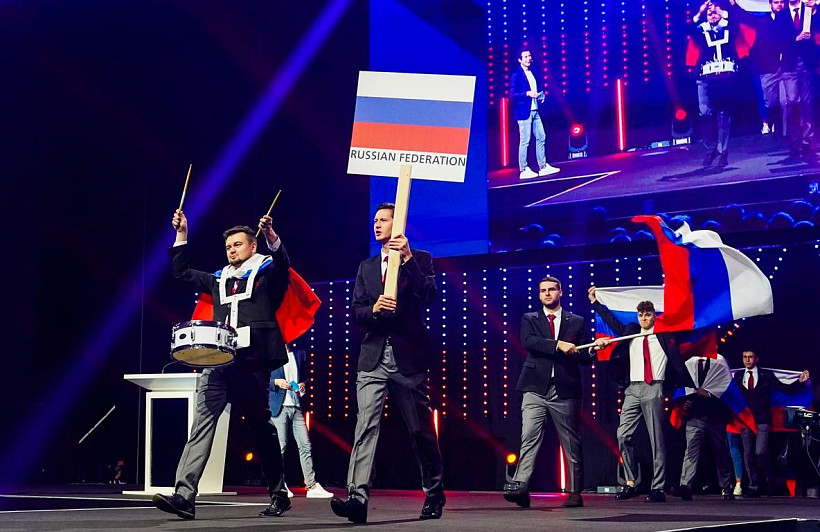 Graz, Austria, has welcomed the grand opening of the European skill competition EuroSkills Graz 2021. About 400 competitors from 31 participating countries will take part in the competition. The WorldSkills Russia national team will perform in the competition in all available skill categories: 38 basic and 10 presentation skills.

As noted by the Austrian organizers, the Russian delegation is the largest among others at EuroSkills Graz 2021. This year, the national team features 57 professionals from 15 regions of the country: Moscow, St. Petersburg, republics of Tatarstan and Bashkortostan, Altai Republic, as well as Moscow, Novosibirsk, Chelyabinsk, Tomsk, Orenburg, Ulyanovsk, Lipetsk, Tyumen oblasts, and Krasnodar and Krasnoyarsk Krais.

“The preparation of the Russian team for the competition was really difficult due to the pandemic. For most of the competitors it lasted for more than a year; they had to deny themselves in many ways for the results they have achieved, to overcome many obstacles, and to take a leap of faith. But the end will justify the means. Each of them is an exquisite professional, a true master of his craft, and they will prove it to Europe,” said the general director of the Agency for the Development of Professional Skills (WorldSkills Russia), Robert Urazov.

The seventh European championship is a long-awaited event for all participants: the competition had been postponed twice due to the spread of the COVID infection.

WorldSkills EuropePresident, Dita Traidas, said, “We have been waiting for this moment for a very long time. Our hopes and dedication to the skill movement have finally brought us here to beautiful Austria. Dear competitors, this is the moment of your start, the moment to show your talent, capabilities and knowledge, to honor your country, which gave you education, to honor the work of your mentors and employers, who trained and invested in you to make you true professionals. You are the best of nation and you are already on the long professional and personal journey that has brought you here. You have followed in the footsteps of thousands of competitors and champions of yesteryear who have achieved and continue to achieve incredible career success and have been growing in their professional and personal lives. But today it is in you that we see the upcoming power and strength of Europe. I hope you successfully pass the tests during the next days, which play an immense role in the transmission of the message of EuroSkills Graz 2021. And finally, I am grateful to each and everyone who contributed to this event gathering our young professionals today to prove the value of WorldSkills on the European stage.”

The opening ceremony of the European Competition was also attended by the Minister of Education of the Russian Federation and member of the supervisory board of the autonomous non-profit organization “Agency for the Development of Professional Skills (WorldSkills Russia)”, Sergei Kravtsov, the Ambassador Extraordinary and Plenipotentiary of the Russian Federation to the Republic of Austria, Dmitry Lyubinsky, and the Head of the Republic of Bashkortostan, Radiy Khabirov.

Anna Luneva, a Russian member of the WorldSkills Russia national team in the Glass Construction Technologies skill, took the competitor's oath on stage, “On behalf of all experts, I hereby promise that we will carry out our duties with complete impartiality, respecting the code of ethics, code of conduct, competition rules, and such values of WorldSkills Europe as fairness, honesty, and openness while strictly preserving the obligation assumed by WorldSkills Europe.”

The competition will take place from 23th to 25th of September in Schwarzl Skill Village. The competition area is 70 thousand square meters. On the same dates, interactive Try a Skill zones will be organized for the skill competition clients, where everyone can try their hand at various skills presented at the championship. The European Competition EuroSkills Graz 2021 also includes a сonference programme. It will take place on September 23rd and will be dedicated to the “The Future of Skills”. Internationally renowned education experts will exchange experience and discuss vocational training, qualifications and skills needed in Europe.

For three days, the competitors will be demonstrating their skills at the highest level, and all for the sake of one goal — to bring the cherished medals to their homelands. Russia has repeatedly confirmed its professional leadership in the international arena. At the previous European Competitions in Budapest in 2018, the country's national team claimed the victory in the overall team contest. The team took the second place at the WorldSkills Kazan 2019 World Championship.

WorldSkills European Competitions are the largest professional skill competitions in Europe, held every two years and aimed at improving the quality and status of vocational education. The main EuroSkills Competition Organizer is the international organization WorldSkills Europe, a non-profit association that is a bearer of best practices in the development of qualifications and skills. As of today, 31 participating countries have joined WorldSkills Europe.