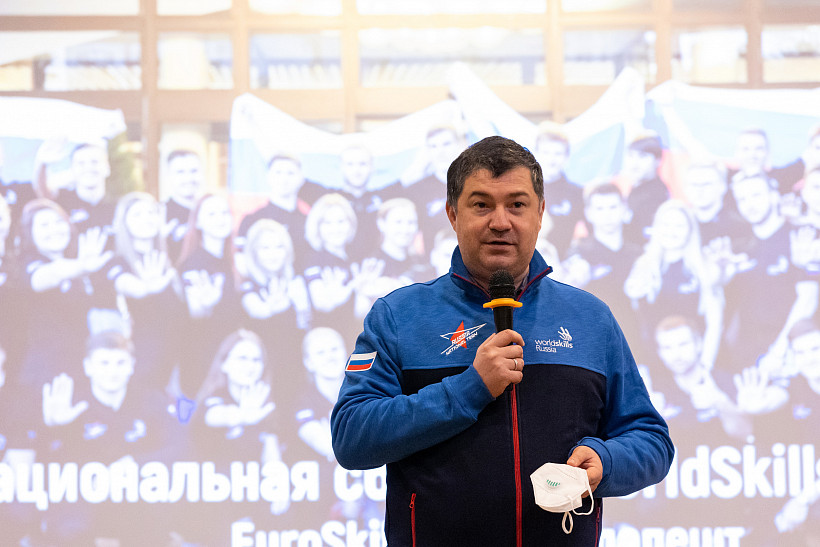 Robert Urazov: "The training techniques of the WorldSkills Russia National Team enable a person to be ten times more productive"

Robert Urazov, WorldSkills Russia Director General, shared the features of training members of the WorldSkills Russia National Team, which began to strive for the EuroSkills Graz 2021 medals. The Competition started in the city of Graz on September 22 and will end next Sunday.

"Traditionally, the competitors from Europe are strong in the service industries and are very well trained. How are we going to compete with them? We train Russian competitors in a special way. These are techniques that enable you to be ten times more productive. It is very important to make these techniques applicable for mass training in the future," said Robert Urazov.

He highlighted the key role of expert-mentors, which is developing in Russia and is no longer limited only to the college or university teachers but is becoming a separate, special type of activity and even business.

Comparing the training systems, Robert Urazov noted that in the European countries this process does not take 5-6 years, but takes 3-4 months. Such a pace is typical for all the advanced countries in the world. As an example, he mentioned the skills of "Floristry" and "Visual Merchandising", which were successfully "imported" in a short time and brought medals to our team at international competitions. Today, these areas are of particular interest for those who see their professional development in being self-employed or dream of setting up their own business.

According to Robert Urazov, Russia is the proponent of many skills presented today at EuroSkills Graz 2021, for example, "Robot Systems Integration". But there are also those that Russia has just joined, for example, "Glass Manufacturing Technology". The country does not yet train specialists in this skill, but the area is promising. He also said that Russia would compete in the skill "Processed Meat Production" at the international competition for the first time.

Robert Urazov also said that in the process of training competitors, not only modern technologies were used but also the experience of the Soviet period, in particular, the methods that were developed at the Central Institute of Labour (CIT) under the leadership of Alexey Gastev in the 20-30s of the 20th century.

"For our competitors, we apply the best practices that are used in the training of biathletes and nuclear scientists, where it is important to teach proper breathing, calmness, and holding the pace while striving for results," said Robert Urazov.

In addition, Robert Urazov highlighted the significant role of the workshop equipment, which was provided with the support of the Ministry of Education of Russia, as well as the value of the latest training technologies. They are protected by commercial rights, including those of partner companies with which WorldSkills Russia cooperates today.

"International communication and the ability to influence international standards are very important. Thanks to WorldSkills experts, we have a significant reputation, especially after the WorldSkills Kazan 2019. Today, many countries see us as a country where they can train the best professionals in the world. Today, people abroad follow our methodology with great pleasure. This enables us not only to follow the standards but also to offer those solutions that are most beneficial to the Russian Federation in terms of both economy and education," said Robert Urazov.

Speaking about the regions’ contribution to success at international competitions, he especially noted the 15 regions of the Russian Federation and 3 leaders: Moscow, Tatarstan, and the Chelyabinsk region, which made the greatest contribution to the success of the WorldSkills Russia National Team.

The EuroSkills Competition is a significant event in the field of vocational education and advanced training in Europe. The largest international skills competitions for young people under the age of 25 are held every two years in one of the 31 member countries of WorldSkills Europe. The WorldSkills competitions in Russia are held annually as part of the implementation of the federal project "Young Professionals", which is part of the national project "Education".