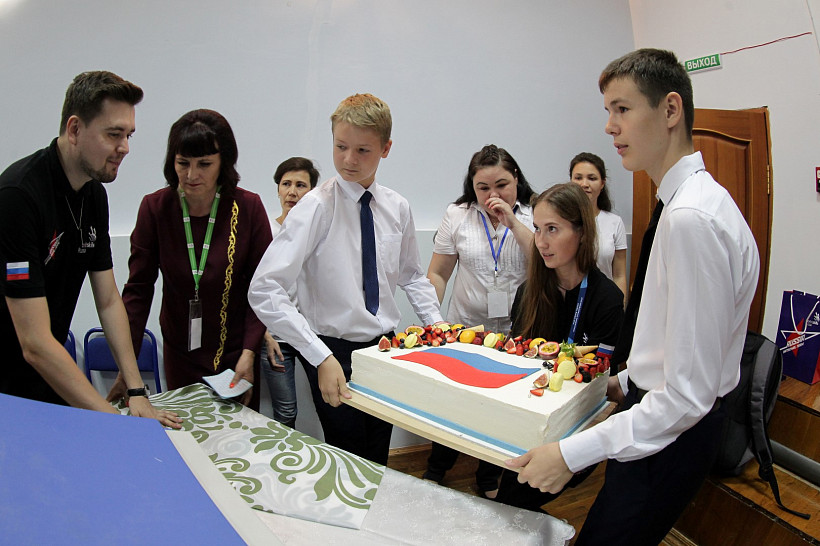 On August 22, on the Russian Flag Day, members of the national team representing the country at WorldSkills Kazan 2019 global competition presented a 15-kilogramm cake in the shape of the Russian flag to Kazan schoolchildren. This work of cooking art was prepared by WorldSkills competitors in “Confectionery” competence.

“It is great that the competition opening coincided with the Russian Flag Day. We are very proud of our national team wearing our flag patches on their sleeves. The happiest moment is when they announce Russian winners during competitions. Each team member comes out with our tricoloured flag. White colour symbolizes nobleness, blue colour symbolizes honesty and loyalty, red stands for love. And I always tell boys and girls: you should be honest when competing, fight to a finish and love what you do. This is the best way to succeed, not only in a competition but in life as well”, says General Director of the Young Experts (WorldSkills Russia) Union Robert Urazov.

National Russian team came to the 23d Tatarian-Russian vocational school within the framework of the One School – One Country educational program aimed to increase the prestige of applied specialities and improve career guidance.

There was good reason to select the said vocational school. This is an educational institution with enhanced coverage of certain subjects and career guidance workshops, which products were demonstrated to the guests of honour. After that, a concert was held to entertain the competitors. National team members, in their turn, shared their success stories and explained what the Russian flag meant to them.

“We came to you wearing the Russian team uniform, with the Russian tricoloured flag on our sleeves, - Anastasia Kamneva, the EuroSkills 2018 golden medal winner in the “Laboratory Chemical Analysis” competence, pointed out. − We must perform as best as we can, with one hundred percent effort”.

“I receive congratulations from strangers who wish me good luck and success. I feel the support of the entire Russian country; I realize there is a really big country standing behind me and that the people are proud of me, - said Alexey Artemasov, WorldSkills Russia national team member in the “3D computer game modelling” competence.

Our team members held a quiz for schoolchildren dedicated to the history of the Russian flag and WorldSkills movement. The children from the upper secondary school showed great awareness in both areas of knowledge and accepted a huge cake, the champions’ present, as a just reward.

“It was an exchange of energy. Such emotional charge before the competition is very important for the national team. Today’s meeting will also do a lot of good to the children who study at this school. It will make them give a serious thought to their future, and encourage to learn more about various professions and the world”, said Alexey Tymchikov, Head of WorldSkills Russia National Team.

WorldSkills Kazan 2019 competition is being held in Kazan on August 22-27, 2019, involving over 1300 competitors from 63 countries to compete in 56 competences. The competition is going to become the most large-scale international event in Russia in 2019.

Kazan won the right to host the competition in 2015 following the results of voting of all WorldSkills International member countries. In Russia, WorldSkills Russia covers all the 85 regions of the country and is one of the top-priority personnel training projects.